Winter by Marissa Meyer
My rating: 5 of 5 stars

I reviewed the Lunar Chronicles on my blog back while waiting for Fairest to be released. Now that I’ve read Winter and the series is complete, I’d just like to officially place all of them on my personal THIS SERIES/BOOK IS TOTAL PERFECTION MY FAVORITE FOREVER list. That’s a little hyperbolic, but you get the idea.

I stand by my gushing in the old post, and especially by my saying this series just gets better with each book. Winter had me on the edge of my seat for, well, a lot of the book judging by my progress updates. I still adore my precious OTPs (all of them. I ship them all so hard), and the writing is so accessible and easy and fun, and the characters and dialogue and relationships (friendships included because they are just as precious and perfect and shippable) all sparkle off the page, and the act is tense and nerve-wracking and…

Ahem, anyway. Again, all that comes across very strongly in my progress updates. Along with a lot of shouty-typing. I love this book, I love this series, and I never want to say good-bye to this world. I’m not sure I can coherently say much more than that about it. But that’s what happens when I love something this much: too many feels = diminishing eloquence. Everything becomes gushing and flailing and shouting and hyperbole. So let my shortened review of this final installment of the Lunar Chronicles stand as testimony of just how incredible it is, and how much I think everyone should read all the books in the series.

View all my reviews

It’s been a while now since my last media review, so that makes it high time I talk about something I’ve consumed and enjoyed recently!

At least half of what I’ve been reading in the last year is in large part thanks to a particular Twitter friend who loves to recommend books (you know who you are, Twitter-twin!), and so far she hasn’t steered me wrong once! This particular series is one of her recommendations.

The Lunar Chronicles, by Marissa Meyer.

Three books have been released into the wild, with a fourth and a prequel of sorts coming out next year. I’ve read all three so far, and STILL can’t believe I have to wait over a year before reading Winter, the fourth book. At least Fairest, the prequel, is being published in just a few months. That might help with the wait; although it might just make it more unbearable by teasing me with a visit to this sci-fi fairytale world without actually finishing the story I’ve fallen in love with.

Oh yes, did I mention that the series is retelling classic fairytales by setting them in a futuristic Earth with all the sci-fi trappings and story-lines?

Marissa Meyer has been bold and inventive in her fearless mixing of genres, displaying all the talents and achieving all the goals of a good Storyteller by breathing new life into timeless tales, weaving themes and elements as familiar as childhood while still pulling off unexpected, unpredictable plot twists, and overall giving us a series of admirably good young adult sci-fi novels in their own right.

The first novel, Cinder, takes the familiar character and reinvents her as a cyborg teenage mechanic indentured to a stepmother who treats her like the property she legally is, set in the plague-ridden Commonwealth capital of New Bangkok on future Earth. There’s the expected elements of the Prince and his ball, but there’s also a temperamental Lunar Queen trying to force Prince Kai to marry her, and there’s Cinder’s quirky side-kick robot Iko, and there’s the mysterious royal doctor seemingly trying to find a cure to the plague, and, well, you get the idea. There’s a lot more story than just a retelling of Cinderella.

But the elements of the fairytale are incorporated and twisted around, so the glass slipper becomes a cybernetic foot, and it makes sense. The fairytale never feels forced into the sci-fi, and the sci-fi never feels cheapened by the fairytale. They build on one another, never feeling like just another gimmick to catch the interest of geeks like you and me. It feels genuine and brilliant. It feels like good writing.

The next book, Scarlet, is of course Little Red Riding Hood, and the third book, Cress, is Rapunzel (as if you couldn’t tell from that braid on the cover!). Both are equally deft at blending the story with the fairytale with the sci-fi, and all three books also show equal skill at weaving together seamless transition from humor to drama to thriller to mystery to romance and back, as we follow the characters and plot through their adventures.

I won’t go into details to avoid any spoilers, but I will say that the story gets better and better as the scope of events broadens with each books, and each new character brought into the story adds to the richness. It’s a diverse cast, and they are all so unique and well-written. Each feels like their own person, and it’s easy to fall in love with your favorites. They’re the sort of characters that stick with you long after the book is closed, slipping into your thoughts and heart until the next re-read feels like meeting up with old friends.

There’s a lot of things I’m looking forward to next year, and the release of Fairest and Winter are high on that list.

Let me know what you thought of these books — or that you haven’t read them yet but now absolutely must because of my glowing review — in the comments!

I have a confession to make. I’ve never watched Mad Men. Not because of any particular reason — my sister watches and likes it — but just because I haven’t gotten around to it yet.

I have, however, watched The Hour.

The Hour is a short-lived BBC drama set in the mid-1950’s, centered around the people involved with a television current-affairs news program called, of course, The Hour. It ran from 2011-2012, lasting only two six-episode-long seasons (a total of twelve episodes), before it was canceled by the BBC due the viewing figures being under their threshold for renewal.

The soundtrack alone — especially the opening title, brilliantly composed by Daniel Giorgetti —  would be enough reason for me to recommend checking out this show. It sets the mood and the era seamlessly, and I could listen to it all day.

The cast is full of talented British actors, including Ben Whishaw (the newest Q in Skyfall, among other credits), Romola Garai (whom I most fondly know from I Capture The Castle), Dominic West (in practically everything), Anna Chancellor (also in practically everything), Oona Chaplin (in Game of Thrones, among other credits), and joining them in the second season, Peter Capaldi (of recent Doctor Who fame, among much else).

The real star of The Hour, however, is the storytelling. There are so many plots and threads and clues throughout each season that new layers will be discovered on each re-watch (something I love), yet still each episode has enough on the surface to draw you in and capture your attention on the first viewing. The pacing in each episode is slow, and it can take awhile to get drawn into the show, but it’s such an exciting and rich story within that it’s worth the effort.

The first episode of The Hour left me feeling like this show had potential, but I wasn’t quite sold on it. I watched the next, and immediately told my sister and parents they had to start watching it. I didn’t need to see any more to know I was on to something special. I started over with my parents (and got so much more out the pilot now that I had an idea where things were headed). They weren’t quite as convinced about it, but were willing to give it a chance. By the fourth episode, they were hooked and as eager as me to watch more.

I don’t want to go into too much details since I like to keep things spoiler-free, and also because I want you to go experience The Hour knowing as little as I did when I started, so you can enjoy seeing the plots unfold as they were meant to. What I will say is that the first season has the overarching storyline of trying to launch and run a cutting-edge format for news program, with a background of actual historical events, and a plot of investigating a conspiracy and murder with a dash of spy-verses-spy. If that doesn’t sound like a fantastic mix, then we obviously have very different tastes. The second season deals with various forms of fall-out, more historical events, different conspiracies of corruption, and so on. It’s just as excellent and exciting. 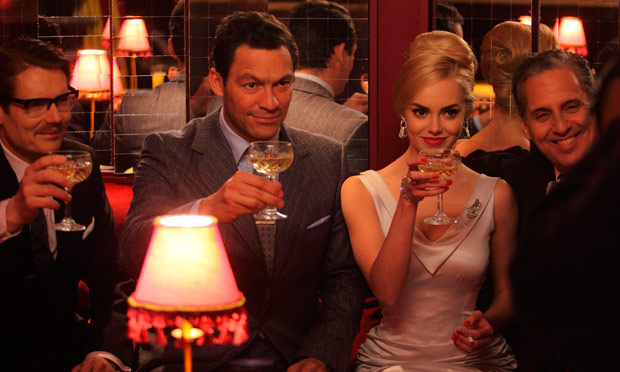 The producers of The Hour said they had plans for the third season after the cancellation was announced, and it’s clear in the final episode that there are a lot of interesting ways they could have gone with it. However, I think they managed to get the stories and characters to a point where the audience isn’t left completely hanging by never knowing what happened next — always a relief when watching a canceled show. It still feels like an open-ended chapter, but it does have a sense of that chapter having concluded rather than feeling like a cliff-hanger.

The Hour is interesting, intelligent, exciting, well-paced and well-plotted. It has an amazing cast and a perfect soundtrack. It deals with serious issues in a way that is thought-provoking and realistic. There’s very little black-and-white/right-and-wrong in the bigger picture; there’s a lot of conflicting points of view and morals clashing between educated and passionate characters. It’s a compelling program, and it’s good storytelling. If you haven’t yet, you really ought to watch it.

*Is actually non-binary genderqueer mostly adult, not a girl.